Do you want to be involved in this year’s carnival?  Applications are now open for those who would like to take part in the procession through town, perform in the arena, have a stall or do all three.

Further details and the application form can be found here. 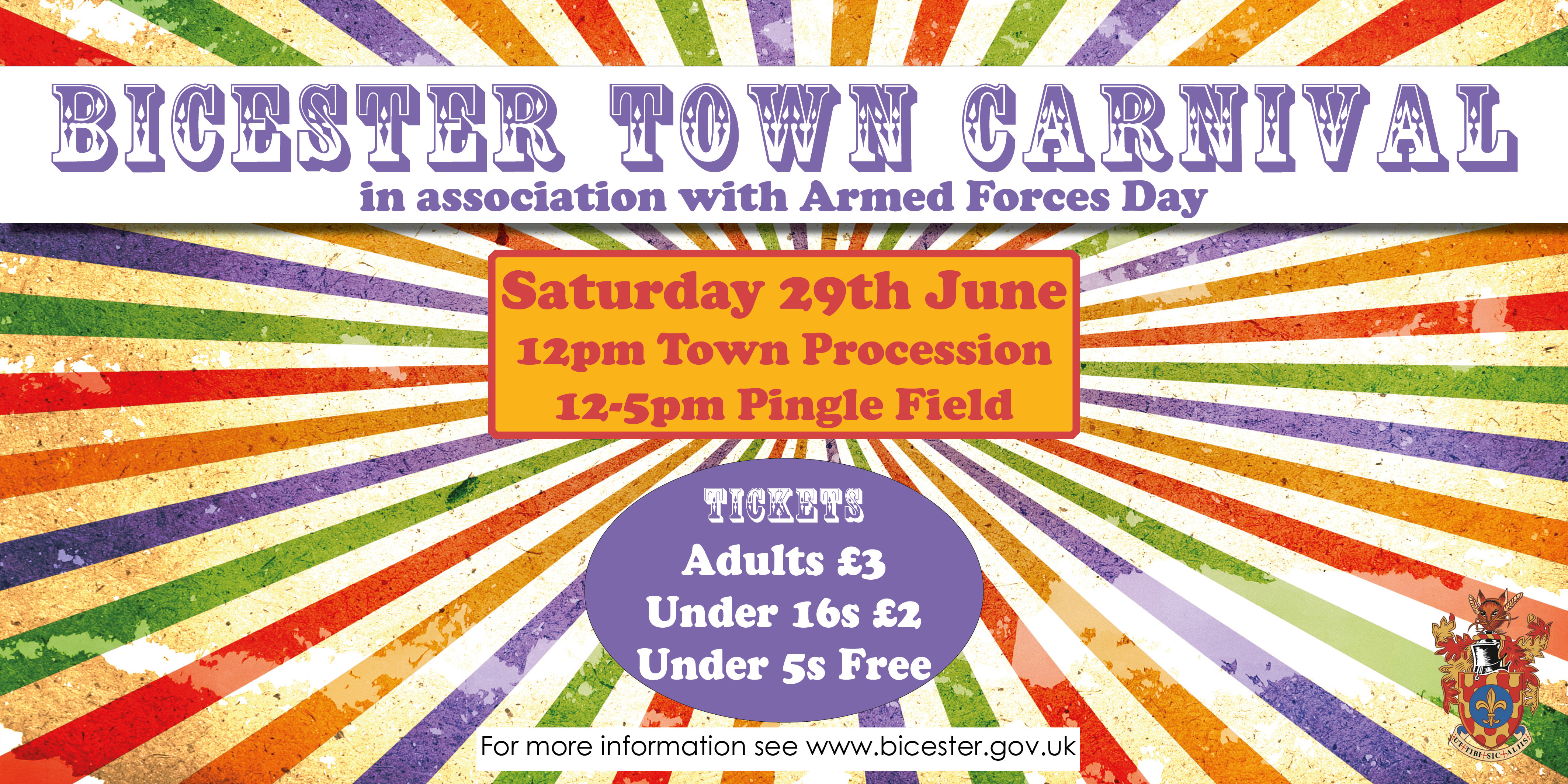 People who are not yet registered to vote are being urged to sign up if they want to vote in May’s elections.

All seats at Bicester Town Council and four Bicester seats on Cherwell District Council are up for election on Thursday, May 2.

In order to vote, residents must be registered on the electoral register, which it the complete list of those allowed to vote at election time. The closing date to register is midnight on Friday, April 12.

Chief Officer Samantha Shippen said: “It is vitally important that you are on the electoral register if you want to vote in May’s local elections.

“The deadline is midnight on April 12, and I would urge people to ensure they have registered in plenty of time.”

People can register via https://www.gov.uk/register-to-vote

Anyone interested in standing as a candidate must submit nomination papers, in person, at Cherwell District Council’s office, in Bodicote, Banbury, between Wednesday, March 27, to Wednesday, April 3, week days only, between 10am and 4pm.

The final date for people to hand in a nomination form is April 3, at 4pm.

This year Bicester Town Council’s boundaries have changed. The former five wards have been split into four wards, now known as Bicester East, Bicester South, Bicester North and Bicester West and there are a total of 15 seats.

Nominations for the up-coming elections for Bicester Town Council will open on Wednesday. (March 27)

All 15 seats are up for election and prospective councillors can submit nomination papers to Cherwell District Council from Wednesday, March 27, to Wednesday, April 3, week days only, between 10am and 4pm.

The final date for people to hand in a nomination form is April 3, at 4pm.

This year the town council’s boundaries have changed. The former five wards have been split into four wards, now known as Bicester East, Bicester South, Bicester North and Bicester West.

Elections are held every four years and in order to stand people must be aged 18 or over, a British or European citizen, or eligible Commonwealth citizen, and live or work in the local area.

Town councillors look after a budget of over a million pounds and influence decisions about issues including open spaces, allotments, the cemetery and events in Bicester.

Chief Officer Samantha Shippen said: “The first stage of the election process will commence on Tuesday 26th March 2019, when Cherwell District Council, the body responsible for elections, will publish the notice of election.

“The notice will be placed on the Bicester Town Council website and noticeboard.

“We would invite anyone interested in standing as a local councillor to look at the breadth of information available on our website and Cherwell District Council’s website.”

Nomination papers must be delivered by hand to the Cherwell council’s offices at Bodicote House, Bodicote, Banbury, OX15 4AA. People can also call ahead to make an appointment on 01295 221534.

A full list of candidates for each ward will be published as soon as possible after nominations close. Elections will take place on Thursday, May 2.

BICESTER Town Council has signed off its budget for the next year with improvements to outdoor spaces top of the agenda.

During the new financial year, 2019/2020, the council will continue to invest in play areas and open space around the town, as well as support local services.

Plans for 2019 include at £30,000 makeover for Sunderland Drive park, which will get a zip wire, continuing financial support for the Citizens Advice Bureau and Shop Mobility scheme.

Organisations and charities across the town will get a financial boost in May when grants totalling £18,500 will be handed out.

Councillors have also agreed to maintain the 2018 fees for football pitches, allotments and cemetery charges.

In order to make the plans a reality, the town council’s share of the council tax will rise by 1.98% making an increase for a band D property £2.46 for the year– less than the price of a cup of coffee.

Council leader Richard Mould said: “We are excited to continue our investment in Bicester’s outdoor spaces which benefit all residents.

“Last year we made improvements to eight parks as part of a five-year initiative to update facilities. We collaborated with partners including Sport England and Cherwell District Council to finance the complete rebuild the skate park in Garth Park which provides a fantastic facility for young people.

“Importantly we are also able to continue to support local groups and organisations through our grants scheme.”

Precept definition: Parish and town councils have the right to raise money from their parishioners via the Council Tax process. They do this by ‘precepting’ on the principal council (Cherwell District Council) who levy on tax payers in that parish or town as part of the Council Tax billing. A local police officer who led a project to build a brand new £150,000 skate park in Bicester has opened the gates to its first users.

PC Vicky Lees welcomed a crowd of young people to Garth Park, in Launton Road, to finally try out the new facility after it was closed in October for a complete rebuild.

Three-years-ago a new skate park was just a pipe dream, but thanks to funding from Bicester Town Council, Cherwell District Council through developer contributions, Sport England, and fund raising by skate park users, it has become a reality.

Specialist skatepark firm Freestyle designed and built the new park in collaboration with the young people who use the facility.

And last week after town council took possession of the new facility it was quickly opened for skate fans to use ahead of an official unveiling later this year.

PC Vicky Lees said: “I have received awesome feedback from the community, particularly the young people and this means everything to me. All the hard-work has paid off.

“This project has showed great community spirit and just what can be achieved by working together.”

PC Lees got involved in 2015 after reports of anti-social behaviour in the town centre, which included BMX riders and skateboarders riding in Pioneer Square.

They told her they wanted a modern skate park – the current one was in a poor state of repair – so she encouraged them to lobby councillors to back an initiative to replace the skate park.

Deputy mayor Jason Slaymaker, who has also been involved with the project since the beginning, said: “The skate park has been completely transformed and is fit for a new generation.

“The town council has really enjoyed working with PC Lees, the young people and our other partners to get this project off the ground.

“This project has been a real community effort – the young people involved are a credit to the town.

“I am looking forward to the skate park remaining a hub for young people for many years to come.”

Voluntary groups and charities across Bicester can now tap into an £18,500 cash pot after the town council launched its annual Grant Aid scheme.

Organisations are invited to apply for a share of the money, up to £1,000, but generally awards do not exceed £500. 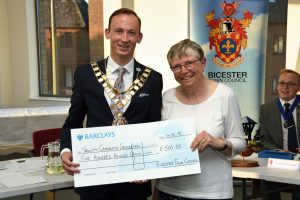 Last year’s successful bids included Bicester Sub Aqua, which received £500 to pay for a training defibrillator, and Langford Village Community Association was given £1,000 towards the cost of new flooring in the community hall.

Finance committee chairman Cllr David Magee said: “We know there are many organisations in the town doing fantastic work and the Grant Aid scheme is a way for the council to financially support this work. 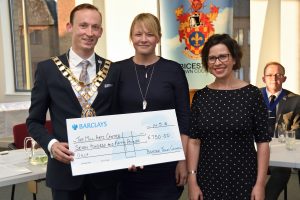 “As councillors we look forward to hearing more about the exciting projects that are taking place in our community. In the past we have helped fund children’s reading book boxes, security cameras, first aid training, circus skills for young people and outings.

“I would encourage groups and small charities across the town, who may be struggling to get a project off the ground due to financial constraints, or those setting up new organisations, to seek support from the Grant Aid scheme.”

The closing date for applications is March 8. Decisions will be made in April and cheques will be presented at the annual Mayor Making ceremony in May.

Bicester Town council has launched its annual awards scheme to recognise the great and good of the community.

Nominations have now opened and residents are invited to put forward the name of someone they feel has gone above and beyond to enhance the lives of townspeople and make Bicester a better place.

The annual Good Citizen Awards, run by the town council, is open to anyone and winners will be presented with a Good Citizen badge and certificate by the Mayor at the annual mayor making ceremony in May.

Last year’s winners included Bicester Garrison Sergeant Major WO1 Lee Davies for his work to bring the local community and the garrison together, and the mayor’s cadet for 2018 Carmen Simpson. 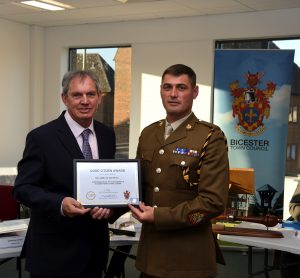 Bicester Town Council leader Richard Mould said: “Everyone knows someone in the community who stands as making a real difference.

“Over the years we have had a wide range of winners from Scout leaders to the foodbank founder.

“The Good Citizen Award is a way of thanking those people across our community who really go that extra mile.

“If you know someone or are involved in a local organisation and want to thank a special person for their efforts, then please nominate them for this prestigious award.”

The Good Citizen Award scheme was launched in 2001 as a way of recognising people who had made a positive impact on their community and thank them for their hard work.

The closing date for nominations is March 8.

The Wellbeing activity map will help you to find activities throughout the district that can help you to get:

All of the featured activities are offered at £5.00 per hour or less and are currently welcoming new joiners. Our easy to navigate map will help you find an activity based on the above categories or by location. You may be surprised at the diversity of affordable activities on offer!

So if you have been wondering where to find a new group activity such as a gardening club, dementia café, yoga, youth theatre, writers’ group or photography club you can find an activity near you here:  https://www.cherwell.gov.uk/wellbeing-map

If you are a group activity organiser and would like to see your activity featured on the map for free please email wellbeing.map@Cherwellandsouthnorthants.gov.uk.