Cherwell Crime Partnership have notified us of an increase in purse thefts.  We therefore advise all visitors to the town centre to be extra vigilent especially the vulnerable.

Working together to make Bicester safer

With just under 2 weeks until the Christmas Lights event, we have been busy putting together a day of activities for you and of course a visit from Santa.  Make sure you visit the Nativity Animals in Sheep Street and from 3pm in Pioneer Square the Huskies.

Look forward to seeing everyone there.

This Remembrance Day Bicester will pay a poignant tribute to those who lost their lives in the First World War.

As the nation gathers to mark the centenary of the Armistice on Sunday, November 11, the families of people from Bicester who served or lost their lives in the conflict have been invited to register to join the Remembrance Day parade in their honour.

The parade will see hundreds of serving soldiers join veterans, the Royal British Legion and representatives from local groups and organisations, to march down the Causeway, around the Market Square and back to St Edburg’s Church.

Bicester Town Council is leading the town’s preparations for the day.

Councillor Richard Mould said: “We urge descendants and family members of those men and women who served or lost their lives in the First World War to join us in the Remembrance parade as a poignant tribute to their loved ones.

“This year’s Remembrance Day marks 100 years since the end of the First World War and the church service and parade will be a fitting tribute to those people from Bicester who paid the ultimate sacrifice.”

It comes as three ‘Silent Soldier’ silhouettes –a naval rating, an airman and a ‘Tommy’ soldier representing the Navy, Air Force and Army – were installed on the front lawn of Garth Park as part of the Council’s Act of Remembrance. 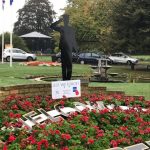 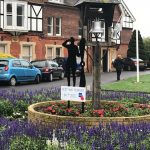 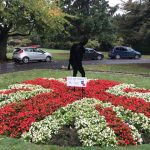 The Silhouettes are part of a movement by the Royal British Legion, RBL, to mark the centenary of the end of the war and thank a generation who “served, sacrificed, rebuilt and changed the nation”.

A further six silhouettes have been ordered from the RBL, and these will be placed in the churchyard at St Edburg’s Church ready for Remembrance Sunday.
Cllr Mould said: “The Silent Silhouettes are a visual reminder of all those people who sacrificed their lives for our future.

“Bicester has long had links with the military and we felt they were a touching way to remember all those who died in the First World War and in conflicts since.”
On Remembrance Day wreaths will be laid on the war memorial, in the churchyard, followed by a service in St Edburg’s Church from 11am during which a poppy drop of thousands of red poppies will fall from the bell tower in a mark of remembrance.

Members of the community who would like to register to join the parade should email Julie Trinder at Bicester Town Council julie.trinder@bicester.gov.uk or call 01869 252915 by Wednesday, 7th November.